From the air-conditioned comfort of the Powersmart offices in sunny Mount Maunganui, my eyes skim down the program schedule for and casually bypass a line that reads “discharge vessel”. I’m looking for installation period estimates so that I can quantify food supplies for the duration on each island and the magnitude of the task implied by those little words is completely lost on me.

The Komawai set off from Funafuti wharf a little after 7pm on Monday with 5 intrepid adventurers packed in a 20’ container. Departure had been delayed again at the last minute to optimise arrival into Vaitupu for Tuesday morning with a full day ahead for unloading.

The Komawai is not a big ship or a new ship and every inch of rust-riddled space was jam packed with gear. Those brave enough set up makeshift hammocks on top of the battery racks and dosed heavily on travel-calm. Roger disappeared and was found a half hour later in the galley sharing the crews’ dinner. The less forward members of the team had to make do with noodle surprise and hope they didn’t see a second time around.

We sat on the deck and watched the lights of Funafuti disappear into the distance as the sky darkened. With it went our last air connection to the rest of the world.

Noise on deck drew us out of various states of sleep about 6am to the sight of Vaitupu from the deck – a long thin line of lush coconut trees broken by a small concrete harbour and a half dozen fishing boats in front of a grand Church. By 8am the crew had eaten breakfast and we tossed our bags overboard, followed down a rope ladder into a dingy and were motored in to shore. Roger gallantly volunteered to stay aboard to oversee unloading.

And then began the process of discharging the vessel.

The size of the task?

The Komawai is 70m long and I would guess no more than 12m wide. It has a large hold accessed from a set of rusty steel doors at the bow of the ship. And a crane that is used to lift cargo into the hold and then onto the closed hold doors. The Komawai is carrying over 500 tonnes of gear and equipment for the solar installation component of the project. Because we are reliant on an excavator that can only lift 1 tonne at a time, there are more than 500 individual crates, pallets and bundles of gear to be discharged (many of them buried deep within the hull of the ship).

What do they have to work with?

Vaitupu is surrounded by a shallow reef that stretches about 100m from the shore. The Komawai cannot risk hitting the reef and must constantly drift or motor in deep water off shore.

Perched on the bow of the Komawai are two small lighters (about 7m x 3m), each with an outboard bolted on the back. These floating platforms are used to ferry cargo from the ship to shore.

Vaitupu has a harbour. It is about 60m wide with a narrow channel blasted through the reef to create a passage that is accessible at both low and high tide. The Vaitupu harbour has a crane that can lift cargo from the lighters onto transport to move it to site. Vaitupu is the only island with this level of infrastructure.

We are lucky to have two tractors with 3 tonne rated trailers and two 1 tonne rated excavators to lift crates from the trailers to the ground on site. When the Komawai leaves it will be taking one of the tractors and one of the excavators on to Nanumea.

How do they do it?

Individual crates or boxes are lifted from the open racks on deck by the crane. Stevedores race about on deck catching hook chains and positioning straps to each load before it is lifted into the air. Everything must be timed so that the weight at the end of the chains is lifted at just the right time so that it swings out over the water and can be dropped onto the bobbing platform below. At the same time the buoyancy of the ship and the lighter don’t match. At any moment the lighter can be 3m from the deck or 10m from the deck. Three brave souls “catch” the cargo as it is dropped onto the lighter and position it for transport to shore. Once a lighter is loaded (a precarious activity that could take more than an hour), it sets off for shore. The small lighter can carry about 7 tonne, the larger once twice that so a round trip, which could take as long as 2-3 hours might only deliver 7/500ths of our equipment to shore.


At the other end, a frantic crew position strops through the pallets so the crane can lift them directly onto the back of a trailer. On site, both excavators are lifting pallets off the trailer and carefully positioning the gear on site so that it won’t be in the way when we start work. With both trailers going, and a 1km trip to site, we had a conveyor going yesterday which was keeping up with the flow of equipment off the ship. In a full day we may have managed to unload 100 tonnes. 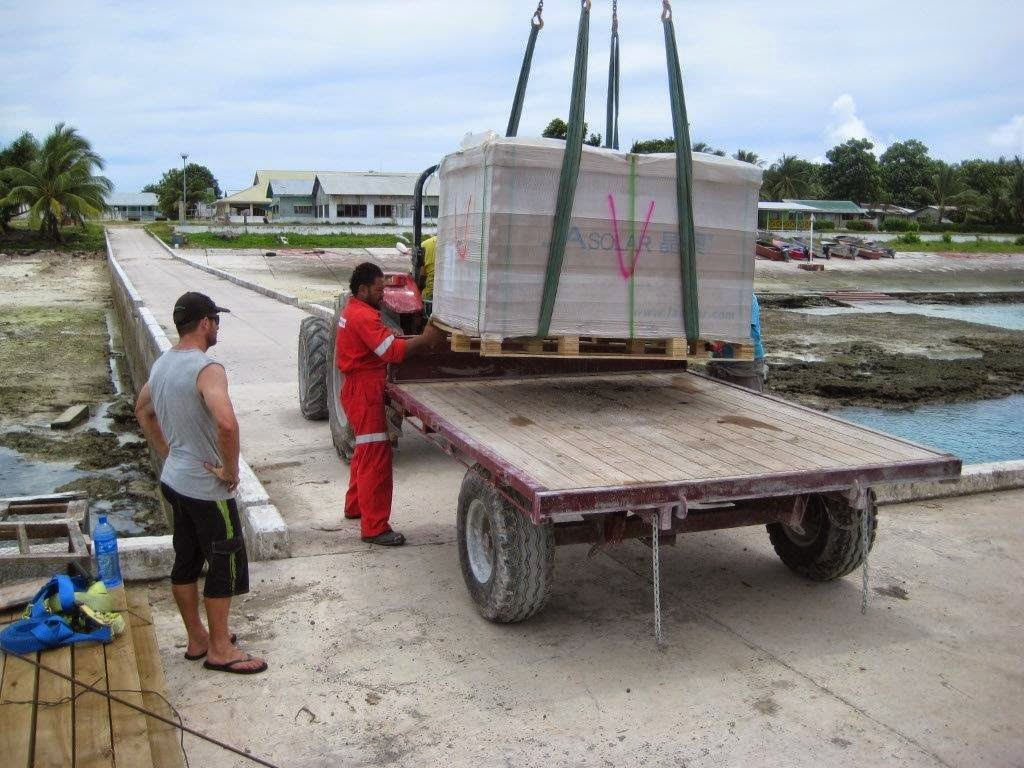 And then just to keep us on our toes, there is the weather. Today the swell has picked up again and it is too dangerous for this precarious off-shore dance to take place. The Komawai has disappeared over the horizon to a safe distance so the captain can take a break and stop worrying about the reef. We will all be out there at 7am tomorrow morning watching for her return.

In the meantime, we are surviving on Weetabix, tuna, rice and breadfruit as our crates of food are buried in the stern of the ship and are likely to be the last items off. When they do finally arrive it will be like Christmas.
Posted by Heather Logie at 5:20 PM